Capacitive Buttons and Sliders for Operating Panels in Medical Engineering

Wherever hygiene, robustness and easy cleaning have high priority capacitive sliders and buttons are used.
EBE sensors + motion realizes capacitive technologies for input systems in medical environments to ensure an even safer and more reliable design.

The basic technology capaTEC® developed by EBE allows for reliable recognition of any contact on the input field even under most difficult conditions. Malfunctions due to surface contaminations such as water, secretions or residues of grease are reduced to a minimum by the sensors. By means of a multi-channel measuring process touches by finger or glove can be reliably recognized and evaluated.

The patented technology allows to use the sensor system under a variety of non-conductive materials such as glass, acrylic glass or plastics. In this way the operating surface remains completely closed and can be ideally cleaned respectively disinfected. In contrast to membrane keypads or rubber safety mats inserted into the housing surface capacitive operating elements do not involve any edges or indentations where dirt, bacteria or viruses can collect.

A further advantage of capacitive control panels is the robustness of their surface. Due to permanent and intense cleaning, prints on membrane keypads and rubber safety maps often fade. Furthermore, the mechanical switch elements fatigue or even fail during their life cycle. In contrast, capacitive switches and sliders can be actuated several million times without failure. Even the permanent surface cleaning cannot affect the control system.

With capacitive buttons and sliders several functions of a device can be dynamically controlled by a single operating element. The user interface can be graphically customised to present all functions and their statuses directly under the user interface. Due to the customer-specific setup of the capaTEC® sensor system surfaces of any shape and size are perfectly utilized. Non-planar surfaces can also be equipped with sensors. Thus, the operator benefits from a highly clear and ergonomic user interface.

In order to further increase the user benefit the sensor can already detect an approaching finger. Before the input field is actually touched the current state of the slider or the currently allocated parameter window can be brought to the foreground. This allows for rapid working in time-sensitive situations. It is also possible to use vibration elements or acoustic signals to give the operator haptic and auditive feedback when using the device. 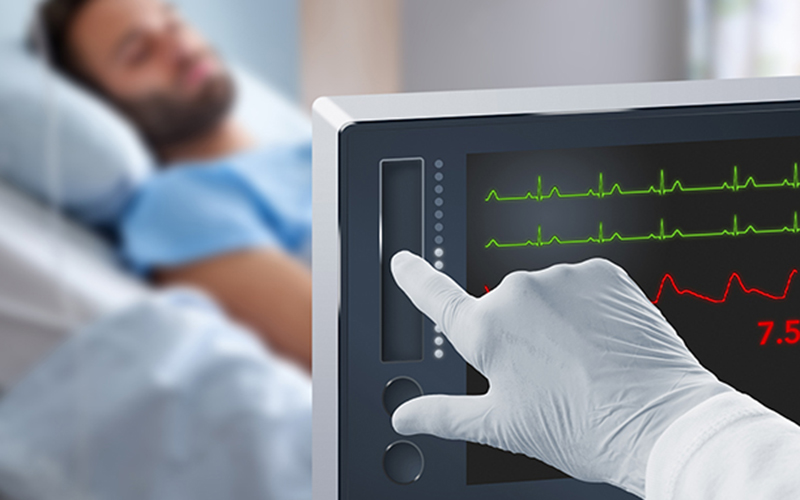 Capacitive buttons and sliders based on the capaTEC®-technology guarantee safe and trouble-free operating on medical devices.

Publication of photos is licence-free and free of charge. Source information requested.

The company EBE Elektro-Bau-Elemente GmbH (brand name EBE sensors + motion) based in Leinfelden-Echterdingen offers OEM-solutions in the fields of sensor and actuating technology, mechatronics, drive technology and magnetic engineering. EBE develops customized solutions and manufactures serial products for OEM customers. The focus lies on capacitive and inductive sensors, among others for level monitoring based on sensor technologies developed in-house as well as mechatronic systems. A further focus lies on intelligent door opening modules for appliances or sensor systems for white goods, medical engineering and mobility. The sensor program also includes level sensors, pressure sensors, position sensors and capacitive switches. Furthermore, EBE manufactures solenoids for a variety of applications as well as robust rotary switches, buttons and encoders and adapts them to the customer requirements. The company sees itself as a competence center for the development and production of sensor systems and drive technology.